I have started the process of ballasting the track it has taken me two weeks to complete about one tenth of the layout so I will certainly be occupied well into next year! The ballast is sand which I have dyed with oil paints diluted with white spirit. The ballast is glued down with Mod Podge matt glue diluted with water.

I have now completed shaping all the contours associated with the layout. These have been created from balsa wood and Ronseal High Performance Wood Filler. Please see some pictures of progress to date taken at the 2mm Association AGM yesterday. 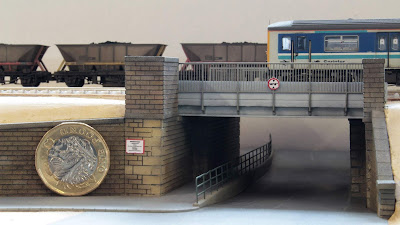 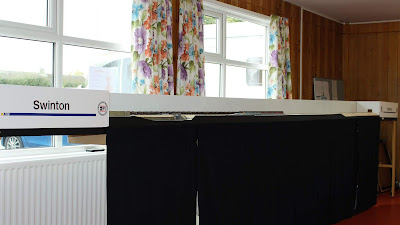 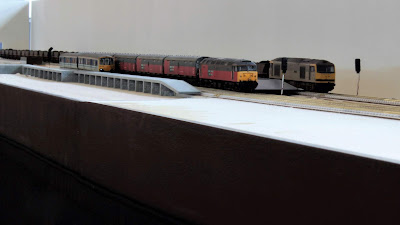 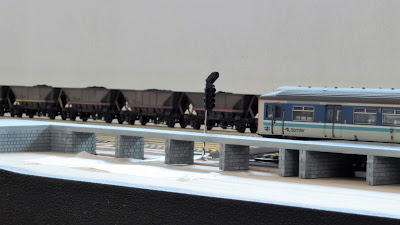 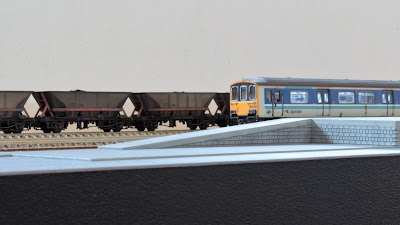 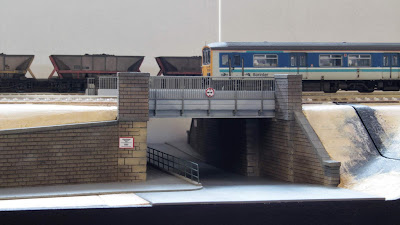 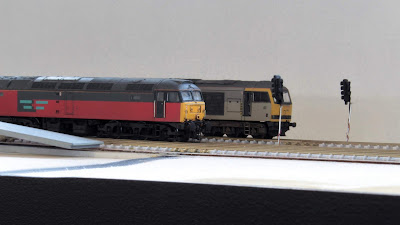 I have been busy over the last year extending the size of my layout from 3.2 metres to 4.8 metres. The layout now includes an additional turnout and therefore all four turnouts that form the divergent route between Leeds, Doncaster and Sheffield are now represented on the model.

I have just completed painting the roads and pavements below the railway bridge and station car park.

The road and pavements including all the paving slabs were laser cut from white plastic and once assembled sprayed with two coats of grey plastic primer. A wash was then created from oil paints and white spirit which was then dabbed on with a make up brush. The road and pavement colour was created from a mix of grey and white with a little bit of yellow to warm the colour slightly. A very small amount of blue was also added for the road but not pavements.


After the wash had dried oil paints were then dry brushed on to provide some subtle weathering to the road and pavements surfaces. The paving slabs were also painted by a dry brush using a mix of grey, white and yellow.

The road markings were produced using a laser cut stencil.


The size and shape of the road markings were taking from the  Traffic Signs Manual Chapter 5. The disabled sign and bus stop sign were imported into Corel Draw from the traffic sign manual and then scaled to the correct size. Other road markings were drawn based on the details in the manual.

The bus stop stencil had to be created from two separate stencils as some plastic had to remain to hold the centre of the B, O, and P together. The holding plastic varied between the two stencils so that the full letters could be completed. The wheel for the disabled sign was also created from two stencils as the gap between the person and chair was so small it would not have been possible to laser cut this out. The edge of the stencils were designed so that they would fit against the paving slabs so consistent alignment between different stencils could be maintained.

I finished painting my laser cut platforms over the bank holiday weekend.  As with my bridge the plastic was first primed with two coats of Halfords grey plastic primer.


The platform has then been painted using Winton and Newton oil paints. To begin the oil paints were thinned down with white spirit which was applied to the surface as a wash by stippling the surface using a make-up sponge.  After the wash had dried additional colours were dry brushed on.

I have had a couple of weeks on holiday from work and have spent some of this time modelling. I have finally painted my plastic laser cut bridge.

The plastic was first primed with two coats of Halfords grey plastic primer followed by a couple of coats of Plasti-Kote tan suede paint to provide some texture to the stone.


The bridge has then been painted using Winton and Newton oil paints, which have been dry-brushed on in the manner described in David Wright's books - see www.dovedalemodels.co.uk. The paints take between two and five days to completely dry out and I found this time very useful to blend colours and re-work any areas that I was not satisfied with.

Below are photos of the completed model bridge. The road is still to be painted but shows the original plastic colour and texture.

The laser cut etch mortar lines are quite deep and therefore I plan to fill these with talcum powder and then seal with a spray matt varnish to fix in place. I then plan to apply an acrylic wash to colour the mortar.

As the oil paints take such a long time to dry, I will wait at least a week to avoid any talcum powder sticking to the stone surface. If anyone has any alternative ideas for filling the mortar lines I would be pleased to receive your comments.
Posted by Andrew at 20:13 2 comments: